The New Moon on April 22, 2020 at 22:26 Eastern Daylight Time occurs at sidereal 9-Aries-16 (Lahiri ayanamsha) in Ashwini Nakshatra. The image below shows the chart of the new moon cast for Washington DC. The new moon in the 6th house indicates there is a still a health concern. Well duh, we didn’t need astrology for that did we?! But astrology can give us some insight into what can we expect this month (until the next moon on May 22) regarding the health concern.

It takes a conjunction of the Sun & Moon to create a new moon and both luminaries are important in analyzing the new moon. The Sun is ruling the 10th house of government and the Moon is ruling the 9th house of foreign places and travel. The Sun is exalted in Aries and the Moon is in a friendly sign. It seems likely that there will be some cooperation with foreign governments in finding a cure for the Corona Virius. Ashwini Nakshatra is associated with miracle cures which makes me hopeful. However, the Moon is also the public and with an exalted government agenda a push for vaccinations may also occur.

Exalted Mars in Capricorn is the dispositor of the Aries new moon and casts its 4th aspect on the new moon. This makes Mars is a prominent player in the chart for this lunation cycle. Mars is ruling the 6th house of illness, workers, employees and labor troubles and 1st house which in a mundane chart is the citizens of the country and their moral. The morale is Scorpionic. On one had some of the population fears literal death from the virus, while on the other hand some of the population finds the exertion of government control in our lives more dangerous than the virus. Mars is ruling these houses from the 3rd house which deals with the dissemination of information within the government, contracts with the public and things related to transportation, communications and schools. With Mars sits Saturn, in its own sign, and Jupiter, in its debilitated sign. What we are being told is very controlled and may not be the whole truth. Jupiter is the planet of truth and justice and support. It advocates for the people and things in the houses it occupies and rules. However, Jupiter is under heavy influence from strong malefic forces right now and uncovering the truth may not be so easy. Conspiracy theories are likely continue, and, it will be difficult to uncover the truth in those as well. So what can tell from Jupiter? What it wants to support, where it wants to see growth in the houses it rules. The 2nd of money, assets and the ability to earn profits, and the 5th house of children, recreation, entertainment, and stocks. Jupiter wants to support the economy and advocate for the education our children. These planets are in Capricorn a hard-working sign that does things slowly. So, it is possible under this lunation that businesses may slowly open back up but it will be with limitations of Saturn and frustrations of Mars.

For those who use trine aspects from the Nodes, we have Ketu (using the mean Ketu position) aspecting the new moon from the 2nd house of money and assets. This is a one degree separating aspect as Ketu is moving backward away from the sun & moon and they are moving forward away from Ketu. Ketu is a karaka of loss and this is showing the lost revenue of businesses and income of the people in the USA due to the virus. Yet the aspect is tight enough to say this continues to some extent during this lunation cycle. Ketu is also innovative so this cycle may be indicative of finding new or different ways to make money. 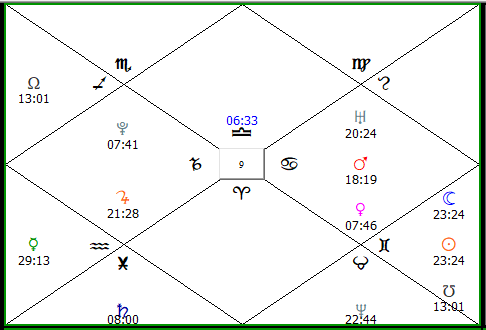 If the New Moon is the seed chart for the month, the Navamsa is the fruit of the tree. In the navamsa chart, the new moon is in Gemini in the 9th house with Ketu. Restrictions on long distance travel and crossing borders is likely to continue through this cycle yet innovation in education and that which comes from sharing information between countries is likely as well. Mars, a prominent player in the New Moon chart becomes debilitated in Cancer in the Navamsa 10th house with Venus in a neutral sign. Venus & Mars are aspected by Jupiter in the 4th. And Jupiter is Vargottoma! (Vargottoma is the auspicious status a planet gains when placed in the same sign in the rashi/birth/initial chart and the navamsa chart.) This helps Jupiter to act in an auspicious manner to earn a supportive a voice for the things it wants to advocate for. Lines drawn in the sand may move, but not to the extent that everything will recover in a month. Mars being the debilitated lord of the 2nd in the navamsa, still shows difficulty with financial recovery of our markets as does the Navamsa Lagna (Ascendant) falling in the New Moon Chart’s 12th house. With vargottoma Jupiter in the 4th house, aspecting Mars & Venus as lords of the 2nd & 8th, the real estate market may pick up with more houses going up for sale giving buyers more options.